Don’t let those innocent faces fool you. I’m on to them.

In the past week, a couple things have happened in my world.

First, we learned that our 5 1/2-year-old needs a nap after school. Luckily, it only took us two days to realize what was going on. Unluckily, we haven’t figured out how to make it really work yet, so sometimes it happens, and sometimes…it doesn’t.

Second, I’d had it up to HERE (envision the hand at the hairline) with being ignored. For example: that blasted black sock was STILL sitting on the living room floor THREE DAYS and FIVE REMINDERS after first being pointed out/instructed to put it away.

I was not happy. Not happy at all.

Saturday morning, I cornered the kids in the van, where they were all seatbelted in and couldn’t get away, and I announced (calmly) (mostly) a change in procedures in our house. From now on, I will give an instruction one time. If I have to give it again, the consequence will be an extra chore. Two reminders = two extra chores. Three strikes and you’ve lost your screen time for the day.

That was 9:30 a.m. By lunchtime, Michael had lost his screen time.

On Sunday, Nicholas made it to two strikes. Even though we had a conversation about it while he was doing the job I’d given him.

(What kind of conversation, you say? I’m so glad you asked. Here’s a strong-willed child insight: “So,” he says, as he’s sllllooooowwwwwwllly doing what I told him and getting his a) loose change, b) wallet, c) ear buds, d) book off the table so I can set for dinner. “So…do we get three strikes every day? Or do they just add up till we hit three?” Would you like to know where I found all that stuff? On the stairs. Still not put away. Envision me pounding my head against the nearest hard surface.)

But wait! There’s more! Sign up today and for absolutely free (oh wait, this isn’t an infomercial? my bad) you’ll get Miss Julianna on Sunday afternoon, trying to sneak extra iPad time by closing the door to the boys’ room so I wouldn’t hear it talking to her.

And that night, in what is becoming almost a nightly pattern, we came upstairs to go to bed and found Nicholas and Michael having a sleepover on their floor.

As my husband is known to say, when told of his children’s latest and greatest exploits:

If you’re on Facebook, you already saw these, but it’s worth preserving in our family history this way, too. Two nights in a row, this week, we went upstairs to go to bed, checked on the kids, and discovered this:

Two sixth graders in black T-shirts, in a garage on a warm, windy Sunday afternoon. Their friends and their mothers (except for me, because every time I sit up I feel like throwing up) are out in the driveway, cutting and Gorilla gluing and holding pieces of cardboard together until the glue sets, to make a boat for the Food Bank race in two weeks.

But these two boys, in their slim black jeans and their black t-shirts advertising basketball and Marvel heroes, the utterly ordinary stuff that preoccupies preteens, have been called into the shady, cool garage by a single noise from the 6-month-old baby sister of Alex’s friend. She’s in a bouncer amusing herself while the crowd works.

Alex goes down on his knees and starts going, “Hi! Hi!” with a big smile. The baby stares at him–let’s face it, probably his glasses. Alex glances up as his friend comes in and tries to wave him off. “I got this,” he says.

“No you don’t!” says Big Brother. “I’ve been dealing with this for, like, ten months!” And because unlike Alex, he has no fear of looking like a fool, he makes truly crazy faces and noises, and thus wins the Make The Baby Smile Challenge.

Two preteen boys, on their hands and knees on a concrete floor, utterly powerless against the charms of a baby.

Despite my general not-feeling-good, I enjoy a private chuckle and a big warm fuzzy, and I think, I am glimpsing the distant future.

And it is beautiful.

“Mrs. Basi!” yells Kindergarten Carpool child, upon leaping into the van after school. “Do you want to have a SNOW DAY tomorrow???!!!!”

Undeterred, he shouts, “You have to put an ICE CUBE in the TOILET and let it melt! And then you flush it!”

“You put your TOOTHBRUSH under your PILLOW!”

“No, you don’t, you put your SPOON under your pillow!” shouts Kindergarten Carpool.

“Well, the REAL way is a SPOON. And you know what else? You put an ice cube in the toilet and wait for it to melt! And then you flush it. But if you don’t flush it, your toilet will overflow!”

“So if we want a BIG snow day, we should dump our whole BUCKET of ice from the freezer in the toilet!”Nicholas is problem-solving hard now. “Mom, can we put our whole bucket in? We can always make more!”

Methinks the elementary teachers are having fun with the kidlets. 🙂 As I’m going to have fun with you now, because seriously, a photo like this has to be used, even if it has nothing to do with, well, anything at all.

“These are not the solutions you are…” oh, never mind.

I don’t know what this is. But it’s hysterical.

For three days, I forgot to pay the monthly rental for Alex’s horn. I told him to stick his horn case on the computer chair so I wouldn’t forget again. He did this, too. Oh, wait, do you need a closeup?

I don’t know what this is, either. Is there something wired wrong in there, I wonder? 😉

Michael, holding a paper back mouse with whiskers on one side:

“Mom, my baby name, is, Dzustin…Bieber!”

“I pray for good roads and a lot of snow.”

Me: “You do realize those two prayers are completely at odds with each other.”

Alex: “No they aren’t! I don’t want ice, I just want a lot of…well…I don’t care if it’s on the SIDEWALKS, I just want it not on the STREET!”

Christian: “Alex wants twenty inches of snow to fall only on the yard.”

Nicholas and Julianna: “Fine. O SAY CAN YOU SEE?”

Me: “Alex, you should start singing the theme to the Flash. You’ve got to fight back!”

Alex: “But they LIKE the theme to the flash.” 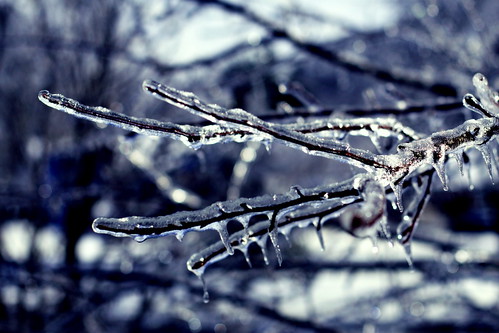 This past Friday, it rained some trace amount that couldn’t be measured, and my entire city went berserk.

All weekend, the weather, the accidents, and how long it took to get home were the only topics of conversation. Hours. We spent hours talking about it.

It caught everybody off guard. See, it was supposed to warm up Friday afternoon and melt everything before school let out, but it didn’t. So as the day went on the chorus of “oh crap, the world is a sheet of ice!” grew steadily more pervasive until all else in my Facebook feed disappeared entirely. Teachers and administrators stayed at schools until seven, eight, nine at night, waiting for busses to arrive. One principal got on the last bus of the night, to make sure the kids got home safely. Some kids didn’t make it home until one in the morning. Around town, busses were crashing into mailboxes and Jeeps. Cars were crashing into each other. A pileup shut down the interstate, and in town a drive of twenty minutes took three hours. I heard that Carl Edwards brought out his tractor and started pulling people out of ditches, trying to clear the road so people could get home.

I was supposed to have carpool duty on Friday. But the other mother was already on that side of town, and she said, “It doesn’t make sense for us both to be out. Do you mind if I pick up your kids early?” I opened up Google maps and ran the routes for her to figure out the best path home.

I didn’t know Google maps had a “burgundy.” But there it was, interspersed with bright red, right along the route from school to home.

It took them well over an hour to make a drive that usually takes 8 minutes. And then we began waiting for Julianna’s bus.

An hour after dismissal time, I managed to get hold of to the school. Only one bus had arrived yet. “Oh!” I said. “I’ll come over and get Julianna, then.” I mean, it’s only about a mile and a quarter from our house.

Well…a mile and a quarter that includes a steep dip into a ravine and back up the far side. We live at the bottom of a much more gradual hill, and by the time the van and I had slipped and slid past about six houses, I knew I wasn’t going anywhere.

I went back home and called the school back.

Between then and 5:45, when Julianna got home, I spent a lot of time fretting and anxious. It’s bad enough to have your kids caught out in bad weather. It’s worse when you aren’t with them and you realize you have absolutely zero control over their safety.

I spend a lot of time trying to figure out how to get people to leave me alone. I can’t work when it’s noisy. I can’t think. And this year, with Michael home in the mornings and bored out of his ever-loving skull, I am really, really short on work time. I dream of the day they all go to school all day.

And yet every so often…like, when my daughter’s safety is outside my control…I find myself imagining a world in which they don’t exist at all. A world in which I am alone—a situation one of my short story characters found herself in. (As a matter of fact, it’s the situation faced by my newest novel character, too.)

Whenever I contemplate this world, I think of the freedom I would have, the luxury of spending as much time devoted to work as I wanted, the ability to go wherever I wanted, whenever I wanted—and I shudder. I shudder deeply and shut my brain off, because the emptiness of that world is more than I can bear to think about. What would be the point of all that freedom and potential for productivity, if I didn’t have this gang of destructicons? Even an introvert draws her strength from the presence of those she loves.

A good realization to ponder on the cusp of Christmas break.