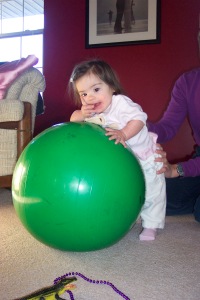 My mother-in-law and I spent last evening decorating a “1-2-3-4” cake filled with chocolate and cream cheese and frosted with pink cream cheese frosting.

Today is the big day. Feb. 2. Groundhog day, or, for the Catholic nerds among us, The Feast of the Presentation. Julianna’s first birthday.

She celebrated her birthday by waking at midnight (I kid you not) and whining. Since we got to bed at 11:30, I was not happy about it. Fortunately, by the time I used the bathroom and got ready to go over, she’d whined herself back to sleep. But she woke up again at 3:30, which is both worse and better than the time she’s been waking up to nurse lately (4:30)–worse b/c I had only been asleep for 2 hours; better b/c it was early enough that I could still go back to sleep, which is not the case at 4:30.

We nursed, and I went back to bed. And a while later I heard Alex whining, and thank God, then I heard Christian already over there dealing with him. I was exhausted–since I’ve been getting up at 4:30 every morning for a week–so I just let him deal with it.

And now, at 7:30, Julianna is sitting on my lap, little cranky birthday girl with a cold.

And Tom over at narrowridge.blogspot.com wrote about his 5 month-old son’s likes and dislikes. So I shall do the same.

(There’s a whole community of people talking about Down syndrome over there, BTW. Very interesting. You should check it out.)

Chewing on her toes
Blowing rasberries

* Her Mardi gras beads
* Her big brother Alex
* Mommy and Daddy–especially Daddy! (You should see her go crazy when he walks in)
* Baths (though that was long in coming–I used to have to get in and bathe with her so she didn’t freak out)
* Pears, peaches, and bananas
* Lasagna–which she goes berzerk about, and won’t stop shrieking till I give her another bite
* Oh, and don’t forget ICE CREAM!!!!

* being cold
* being put to bed
* oh yes, sleeping during the day. She hates that.
* having her face cleaned and her gooky eye wiped
* babysitters

At the moment she’s griping b/c she’s lying on the floor bored, and wants Mommy to feed her her birthday breakfast. In the last two weeks we’ve seen marked differences in her development. She’s started reaching for things–taking initiative in interfacing with her world. She wants to touch faces, grab noses, lunge and grab toys. Things I had come to believe were going to have to be taught and just barely grasped before we went on to the next developmental task, which would also have to be taught, and which she would barely grasp. Yet here they are, and again, I just have to learn to be patient.

There have been times in the last year when I have been overwhelmed by all that is to come. And not that long ago I was quite sad, deep in the midst of grieving. No doubt I’ll be there again, and sooner than I would like to think about. But for now, I’m just an ordinary mom who’s in a bad mood b/c I haven’t had a full night’s sleep in over a week.

To those just starting the DS journey, or those struggling with frustration, fear or a sense of being overwhelmed…hang in there. It’ll come.