Last night was one of those nights when I think we really ARE as crazy as people think we are for having four children. Nicholas (AKA drama king) is sick, and you know what that means. If you don’t, let me enlighten you: it means he got up SIX TIMES between ten-thirty and six a.m. Add two nursings and one scream from Julianna, who was convinced that there was a thunderstorm outside her window, and you can imagine I am one seriously cranky mommy this morning.

Cranky mama status is especially troublesome as I intended to focus this post on my cute kids. They’re not looking so cute to me today.

Which means, since my attitude shapes my reality, it’s even more important today than it would have been otherwise. So why don’t I focus mostly on Nicholas, the light of my life, the perpetual “why”-asker and camera ham? Now, when I say camera ham, don’t think I’m overstating. In the home videos from his babyhood he couldn’t seem to do anything but pose and give silly, goofy giggles. Now he says, “Mommy, wi you take pi-euh of me?” It’s hard not to oblige when he gives me pictures like this one:

He’s also the klutz of the family. Wednesday night he tripped and smacked his head on the metal base of a schoolroom desk while we were at choir practice, and now sports a knot you can see from across the street. Thursday morning he hit his head six times between getting up and breakfast time. I’ve known for a long time that he was going to be his mother’s child in that regard. I was the one in our family who had to have stitches, who broke her arm, the only one who had to have surgery…there’s gotta be one in every family, and in mine Nicholas is it. You know what? That doesn’t jive well with drama king status. Ugh.

Except you can’t really see Michael’s face, can you? How about this one?

Julianna got her own post and pictures yesterday, so let’s leave off with a picture of Alex doing what Alex does best these days: being an awesome big brother. 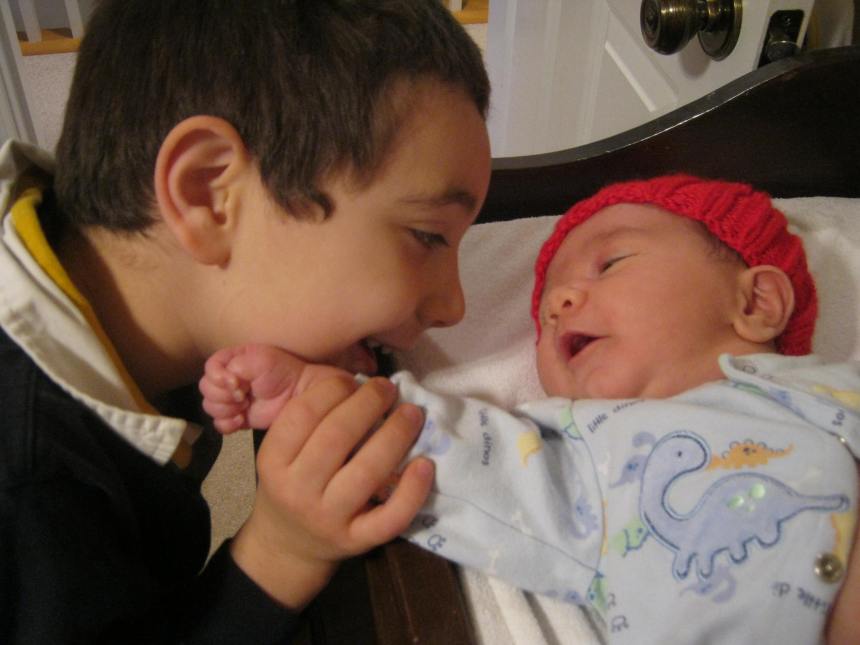 Now, how can I be a cranky mom after those pictures??????