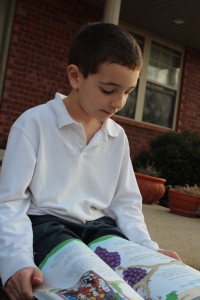 The other day Alex and I were walking through Macy’s on a hunt for khaki pants ($7.99 on clearance, thank you very much). If my boy has a primary love language, I haven’t figured it out yet; he loves time and words and touch and gifts in equal measure. Such a sweetie. As we walked past the children’s clothes he stopped dead and said, “Oh, that’s so cute! We could give that to Michael!”

“Yes, baby clothes are awfully cute, aren’t they?” I sighed. “It makes me want to have another one, just so I could buy more…but…”

“That’s three reasons to have another baby,” Alex said. “The clothes are so cute, the babies are so cute…and they’re fun to play with.”

I haven’t asked because I don’t want to make a big deal of it, but I think I know what Alex made as a New Years resolution. I think he set a goal of saying thank you. Because he thanks us all time. So understated, and so specific: thank you for getting me a glass. Thank you for making dinner. Thank you for reading to me. It puts my heart all a-flutter. And since Lent has started, he’s become incredibly more helpful around the house, hanging his siblings’ coats up as we come home from somewhere, running to get things that I need without being asked. He amazes me.

I still hope and pray that God will call one of my boys to a religious vocation, but I really don’t think it’s going to be Alex. He’s a daddy at heart already. He adores Michael and wants to play with him, teach him, and help him all the time. Michael gets this cute little half-smile when Alex takes his hands and guides him through the sign of the cross.

Michael, however, thinks this whole prayer business is alternately a family joke and a bother. That boy is hungry come dinner time. He doesn’t want to wait for any troublesome family prayer. About three fourths of the way through, he’ll catch on that we’re praying, and he’ll clap his hands together three times with a big smile and return to his food. ‘Nuff praying for that boy. It’s time to eat, man!

Here’s a video of Alex playing his festival pieces last night. We’d just come home and he was cold in the basement, what can I say?

And here’s an iPad photo I almost can’t believe my husband permitted me to share. I call it “Willy Waterloo Washes Warren Wiggins Who is Washing Waldo Woo.” (If you don’t recognize the quote, brush up on your Dr. Seuss.) 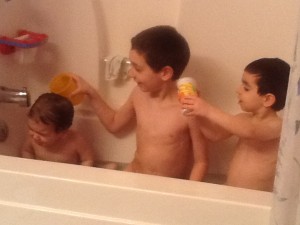 Last night we took the kids to Macaroni Grill for dinner, just for fun. Nicholas dropped three forks on the floor and Michael felt his food would taste better if he took my fork and pushed his spaghetti and meatballs off the plate onto the tablecloth…plus a few choice ear-piercing yells when he wanted to get down and I wouldn’t let him. But overall it went pretty well. As we were leaving an older couple stopped us and complimented us on our children’s behavior. Once again, I got all warm and gooey inside. Julianna was feeling social and shouted “Hi Geepa!” about five times (that would be “Grandpa.” She classifies people by name according to their age; earlier in the evening she yelled “hi Daddy” at the father of another family. 😉 )

Last but not least: my new book is available, and I am trying to set up a blog tour. If you have a blog and would be interested in hosting me or reviewing in exchange for a free review copy, let me know!

5 replies to Sprinkles of Sweetness (7QT)