It’s almost Halloween, and our superhero-obsessed family has decided to go as The Avengers. There were months of on-again, off-again discussions of who would be whom. The only certainties were me as Black Widow and Nicholas as Iron Man, because the costume we have already is his size. At length, we settled on Julianna as Captain America and Michael as The Hulk. Saturday night I ordered a Captain America T shirt off Amazon for her, and we were officially committed.

So on the way to church Sunday morning, who should pop up in the back seat? Miss Ju-Ju-bee, out of nowhere, says, “No! I wah Huck!”

Dead silence in the car. “What?”

Ahem. Apparently we forgot to ask if she had an opinion.

Step one for me in becoming Black Widow is to get the hair. I have the curls, but not the color. So: to spray-on color, get a wig, or dye it? 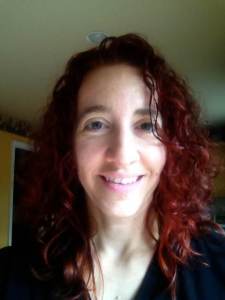 My first-ever hair coloring. So far my feelings can be summed up: meh.

Somehow I thought I would feel different, yanno? Uh, news flash: hair color isn’t kinesthetic. Since I’m not walking around staring at myself all the time I keep forgetting. Day 1 I was going through the pickup line at school. One of the first grade teachers kept staring fixedly at me, and I couldn’t figure it out until I came around to the 3rd grade to pick up Alex and another teacher caught sight of me and smiled widely, drawing her fingers through her hair.

I waited to do the hair color until after we took family pictures. Nicholas was in a bad mood, so naturally, the Law Of Portrait Taking was in effect: you can get everyone to look good, but not in the same picture. To illustrate:

We’ve been engaged in a Saga of TV lately: ditching cable because it was too expensive when all we need is networks; two antenna failures; a failed attempt to start PRISM, and then, at last, Direct TV (i.e. more channels than I can even process let alone know what’s on them, considering I never turn the stupid thing on except for Netflix or a kid movie anyway).

Anyway, the point is that this week the Direct TV guy came to hook us up. Nicholas was in a space raiders mood, and spent the entire time telling the guy that he (the TV tech, not my son) was an alien, and thus he (my son, not the TV tech) was going to shoot him.

Fortunately, the guy had four kids and, thus, a sense of humor. When he left, Nicholas said, “He’s got in his flying saucer.”

I was thinking about Michael last night. At almost 23 months, he’s finally trying to talk, although his efforts to make his mouth mimic the sounds we’re asking him to make clearly require a lot of thought. But he’s suddenly discovered the ability to recognize the need for the toilet and put himself on. And I am thinking–amid the shattering of pasta bowls, snapping of Sissy’s glasses-earpiece, and walking along the tops of couches until he falls off–that it is truly amazing to watch a baby morph into a “person”. That’s poorly worded, I know, but the metamorphosis from a cuddly baby who watches the world go by and a child who interacts with it is just really striking me lately.

2 replies to A Redhead, The Avengers, and other QTs