It began Tuesday morning, when I pulled into a spot at the public library twenty minutes before it opened. I let Michael get in the driver’s seat and play with all those fun controls while we waited. We were not the only people killing time between school dropoff and library opening time. There were half a dozen other cars in the lot. In the white sedan beside us, a blond college-age girl sat navigating her a smart phone…with the car running. For over fifteen minutes.

Now, it was not a hot day. Nor was it a cold day. My blood pressure rose every minute she sat there spewing pollutants into the air unnecessarily. I wanted to get out and knock on her window and suggest that she shut her car off. When we all got out to walk into the library  at the same time, I sent a little prayer winging skyward: Do I speak, or do I keep my big mouth shut?

The compulsion to speak was nearly beyond control. But I could not for the life of me come up with any way to address it that sounded anything other than  nose-in-your-business.

And so I didn’t say a word.

This is not an easy dilemma to solve. On the one hand, it seems clear that life in this world will be much better if we stay the heck out of each other’s business. I may not agree with your choices, but it’s wrong to stick my nose in and give you the third degree about it. Our personal choices are our own.

A friend articulated it this way later that afternoon: “I kind of think whether people run their car for half an hour is their prerogative.” 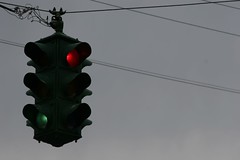 Because it’s not your prerogative to do things that screw up the world for everyone else. We all have to live on the same planet, and that means we all have to think about how our actions impact others. That’s the reason we have rules at all. Nicholas has been asking questions lately like, “Why does green always mean go?”

“Because that’s the rule they made, honey.”

There is no why, it’s just a rule someone came up with so we could all coexist peacefully.

This issue–unnecessary consumption–is a global issue. It impacts all of us.

Christian has tried for years to convince me that arguing with people is useless, that no one changes their mind because you engage them in flame wars or even spirited debate. All that happens is everybody leaves with bad feelings. This philosophy wars with my nature–I come from an extensive, widespread net of extremely opinionated people  dating back at least two generations, and probably further, only I was too young to know them. But in the past decade and a half I’ve come to recognize the truth of what my husband says. More often than not, I take deep breaths and abstain from pointless argument.

But then again, evangelization can’t be limited to people who already agree with us. And if I feel convicted on an  issue because of my faith–in this case, that we have a responsibility to take care of the earth we’ve been given, and that there are dire consequences if we thumb our nose at that responsibility–then I’m not really living out my call to discipleship at all, am I?

Dawn on Cloud Nine, by Krasnickaja Katya, via Wiki Commons

So…I’m opening a can of worms I’ve been avoiding all week. I’m just going to say it.

I believe in global warming.

I know that a good number of my readers probably don’t, but there it is. I don’t see how you can look at the explosion of devastating storms and years-long drought in recent history and not think, “Gee, isn’t it just possible that something we’re doing is having an impact on this?” These weather events are not judgment from God, and they are not just oh-well-it’s-a-fallen-world-after-all. If they’re getting more severe and more common, we need to take a hard look in the mirror and think about this quote from Fitzgerald:

They were careless people, Tom and Daisy–they smashed up things and creatures and then retreated back to their money or their vast carelessness, or whatever it was that kept them together, and let other people clean up the mess they had made…