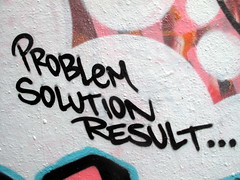 Life is unpredictable, but over the past several years I’ve learned there’s one thing I can count on with absolute certainty: somewhere between one week and two days before university graduation, I will lose my voice. It happens virtually every semester, just before I join the platform party at honors convocation as the official singer of the alma mater.

This year was no exception. For three days I took cough syrup, slathered myself with Vicks, and drank tea in an attempt to get the slow-moving virus to clear my body before graduation. It happened just in time. Praise the Lord, I had a voice on Saturday morning.

But the thing that stands out to me about this weekend is that the commencement speeches were the best I’ve ever heard. Jim McKelvey, who co-founded Square, had everyone laughing at intervals, but the message was serious. He wanted to point out to the graduates that no longer can they count on praise or immediate feedback like grades to keep them motivated. From here on out, they have to motivate themselves.

It could have been a real downer of a message, except for the humor and the takeaway: Find a problem. Find a problem that bugs you down so deep, you’re on fire about it. A problem so troublesome, it gets you out of bed in the morning. Find that problem, he said, and then go fix it. And if you succeed, find another one to solve.

After McKelvey came Jim Held, the owner of Stone Hill Winery in Herman, Missouri, who was being awarded an honorary doctorate. He came to the microphone and said, “I could talk about the wine industry in Missouri, but I won’t. Instead, I’m going to tell you about the last 2 1/2 years of my life.” It was a simple but powerful story of a stroke he was told he wouldn’t recover from–and did. He changed his bad habits, and he changed his future. The takeaway: the choices you make have consequences. So make good ones.

I come out of this weekend feeling pretty blessed, for many reasons I can’t go into in public. But this blessing I can share: I feel tremendously blessed to be staring down age 40 with a clear sense of what my life-motivating problems are–the ones that motivate me to get out of bed in the morning. There are two. One of them I outlined on Friday. The other is the need for a healthier view of sexuality, one that recognizes and embraces the message Jim Held underscored: personal responsibility and self control, the fact that choices and consequences go together and you must take the responsibility to exercise self-control to achieve the outcome you value.

I feel even more blessed that these two passions of mine dovetail so seamlessly: that living out a sexuality that respects the way we are put together (as opposed to slapping a pharmaceutical on something that isn’t broken in a misguided attempt to “free” sexual expression from its natural consequences) also respects the earth.

My question for you today is this: what motivates you to get out of bed in the morning? What global problem do you want to solve? You don’t have to answer that publicly, but think about it. And if you’re willing to share, so much the better.

4 thoughts on “What’s YOUR Problem?”