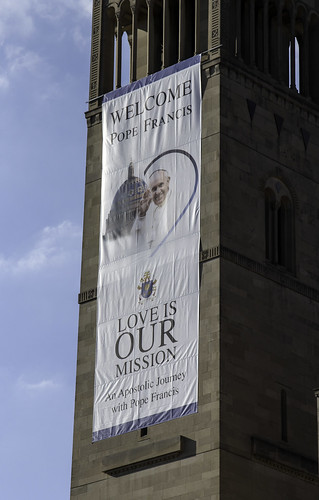 1. I think it must be very discouraging to be the Pope. You go to Congress, you say exactly what the Spirit calls you to say, you challenge them to look at the world from a Christ-centric than political view…and then they all go to the news outlets and tell them, “Well, what he REALLY meant to say was…” and spout exactly the same tired political rhetoric they’ve been inflicting upon everyone all along.

I don’t think I could handle the frustration.

2. The news media can’t quite figure out what to do with this man. They want to stick him in a political category and they can’t, because he’s not a politician, and he’s not making political statements. We hear them that way because the issues are things that are dealt with politically, but these are issues of faith, not of politics. Catholic teaching is radical and challenging to both sides of the political spectrum; in other words, it stands apart. I’ve said that before, but now it’s being illustrated right in front of our eyes.

3. I love how the Pope keeps gently reminding people that the primary purpose of his visit is the World Meeting of Families. Now that I’m seeing Facebook feeds from people who are there I sort of wish I’d made the monumental effort to make that happen for our family. But then, things work out as they’re supposed to.

4. I’ve realized anew this week that I am a Catholic first and an American second, which, by and large, is not the case for the people who are in positions of power now, picking and choosing what Catholic teachings line up with their chosen flavor of political affiliation. (Them’s fightin’ words on a whole host of levels, I know.) Don’t get me wrong. I understand that a pluralistic country with separation of church and state can’t, by definition, follow Catholic teaching lock stock and barrel. But I can’t separate my faith from my convictions about the way the world should look. I would always put my faith above the Constitution. And for that reason I will never run for office, because I’m not qualified.

5. It’s been fun to have conversations with the kids this week, though. And for all my eye-rolling on the topic of the media, I have to say that in the main, this has been a good week for my Church in the news. Things are being presented to the world that are part and parcel of my everyday vernacular but which are quite exotic to non-Catholics, and that is all to the good. And by and large, they’re being respectful and getting it right, which frequently is an if-fy proposition with the news media. (To say nothing of the entertainment industry, which seems to have an obsession with portraying Catholics and always, always getting it really wrong.)

6. Of course, there are always nay-sayers. There’s an expectation among people of faith that truthful messages will always be greeted with scorn and persecution, so the near-universal appeal of Francis makes some question whether he’s really the real deal. But Jesus drew the multitudes, too; people are drawn to holiness and authenticity and lack of fear, even if not everyone ultimately chooses to heed the message.

7. It’s always easier to see where everyone else is failing to heed the message. Quite a bit trickier to have the honesty and clarity of vision to recognize it in your own life. I think that’s my takeaway from this week: the need to scour my spiritual house and find the places where I am not listening, and learn to do so.

8 thoughts on “Thoughts On The Papal Visit”