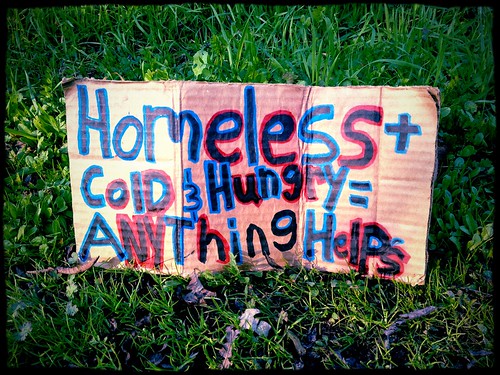 The light at the top of the exit ramp was red when I pulled up to it. There was a man there. Grizzled. Curly beard. I recognized him. I’ve given him protein bars before. I pulled one out of the box between the seats and rolled down my window. “Here you go,” I said.

The light was red. What was I supposed to do now? Roll my window up and ignore his existence?

He gestured to the opposite crook of the cross formed by four-lane roads. “Naw. I been sleepin’ down in those trees. It’s been pretty chilly lately.”

“I was going to say, it’s not been warm…” I eyed his thin jacket. “Do you have a tent or something, at least?” (Which is not as stupid a question as it might sound. We’ve seen tent communities in highway right-of-ways before.)

It was exactly the the thing I’ve always (to be perfectly frank) dreaded about making eye contact with the homeless people: the need to have a conversation. I want to help. But an introvert hates trying to connect to new people anyway, and what can I possibly say to this man, who survives with almost none of the things I consider to be basic necessities? As the light turned green, I said, “Well…”

He smiled. He was missing his two middle upper teeth. “God bless you, ma’am.”

“Take care of yourself,” I said. Lame. Totally lame, when it’s perfectly clear that this guy has almost none of what he needs in order to take care of himself, and I, even I who am driving around in a van with 130,000 miles on it and making do with one TV (which is still a picture tube)—I could easily buy him a tent and a sleeping bag and a backpack to haul it all around in, if I hadn’t bought, however unwillingly, into the narrative that says These People might just trade it for drink and drugs anyway. And if I hadn’t used the truth that “you can’t fix someone else’s problem” as an excuse not to bother trying.

My insides writhe to admit I’ve allowed my own practice of mercy to be so small, so petty, and so accepting of blanket judgments.

But as I made the left turn and headed for home, I thought of Jesus saying, “The poor you will always have with you.” And how I’ve heard people who work with the poor say the goal is to provide today’s needs. That we don’t have to feel guilty because we’re not providing an ongoing monthly budget and a 401(k).

And I think of Oskar Schindler in the movie, crying, “I could have done more. I could have saved more.”

And I thought, this is what it means to practice mercy. To know it’s not enough. To feel uncomfortable in recognizing the extent of my own privilege. To live with that discomfort, and let it shape my choices today, the ones that build the person I will someday be.