They tootle down the sidewalk this morning as I sit with my back against the brick front of the garage. Nicholas is in the lead, with the pop mower, but Julianna quickly overtakes him with the umbrella stroller (empty, of course). In a minute, I’m going to have to go chase them, turn them around before they get too far away.

They’re two peas in a pod, my 3 ½ year old elf and my baby who is no longer a baby. I know I’ve said that before, but last night I realized anew how true it is. More now than ever, because Nicholas has just about caught up to his sister. They’re both struggling to reproduce “ma” and “da” and “ba” on command, both signing like they were born to it, learning new signs at a dizzying rate.  Both discovering likes and dislikes, manipulation and the joy of playmates and testing boundaries.

This summer, she was teaching him things—like the sign for “more,” and how to make a lot of noise with stainless steel mixing bowls.

Now, he’s begun to  teach her things. So far, they’re things I’d rather neither one of them knew, like going out in the street, and dropping food in their cups of milk. (Yuck!)

The twinning of my littles has arrived, and there’s a sweetness in watching them discover the world together. The squeals and giggles at the sight of the neighbors’ cat, the mirroring attempts at imitating a dog barking on the next street over. If things continue on the same track, three months from now it will be over, Nicholas overtaking and leaving his big sister behind.

Still, I expect it’ll be a while before he realizes it. He’ll continue to trot along behind her, screaming when she takes his toys, causing her to scream when he takes hers, and in between times, sharing giggles and games so cute that they break my heart with their beauty. Because no matter how old they get, she will always be his big sister. 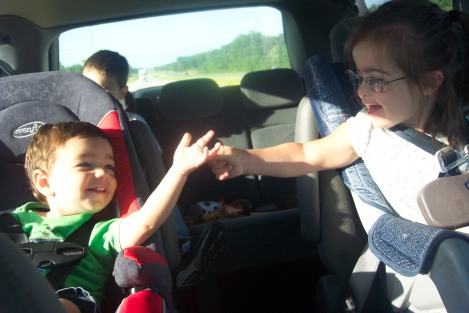 5 replies to The Twinning of the Littles