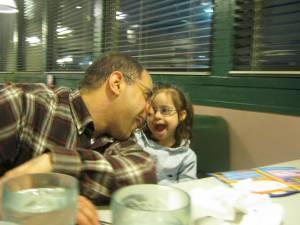 My cute little blond niece came out to the bus with me to retrieve Julianna, who greeted her with all the enthusiasm of a 4-year-old receiving a surprise visit from a cousin. The bus was late, so the rest of us had eaten already, and my sister sat at the head of the table nursing the baby and flirting with Julianna while I took Nicholas upstairs for nap. As I came back down the stairs, I saw my niece regarding Julianna carefully. “How old is Julianna?” she asked.

“Four,” I answered briskly on the way to putting dishes in the dishwasher.

My sister and I both saw the look in her eyes. I’m four. Why isn’t she talking?

I noticed, but I didn’t think much of it until my sister called yesterday and said, “I could see the gears spinning. It won’t be long before she starts asking questions.” It sounded like a prospect she didn’t relish.

Christian and I have been talking very matter-of-factly to Alex about Down syndrome almost since the day Julianna was born. I say “almost” because for the first week or two we couldn’t mention it without breaking down. So we held back from talking to our impressionable toddler about it until we could keep it together.

Still, for all of our children, Down syndrome has been a natural part of the family tapestry for their entire lives. This is a deliberate choice. Julianna should not be defined entirely by her extra chromosome, but the reality is that Down syndrome shifts the way she experiences life, and thus, shifts the way we experience life, too. Someday, she’s going to get big enough that we’ll have to gauge carefully whether she feels stigmatized by the hulking Down Syndrome Awareness all around her, and adjust accordingly. But mostly, it seems to me that it’s better to lay it all out there in as non-dramatic a way as possible for people. (Remember “To Tell or Not To Tell?” and my answer to that question?) Otherwise, the elephant in the room becomes even more uncomfortable—how can a person function normally in a conversation while pretending not to notice that there’s something different about your child? This is one of those walls: by avoiding the topic, we overly stigmatize what is, as far as Julianna is concerned, a completely normal life experience. After all, she does all the same things her cousins do (“we’re more alike than different!”)—she just does a lot of them later.

So here’s what I told my sister: Don’t avoid the subject. Just say it directly, without fuss. We are all made up of tiny things called chromosomes, and Julianna has one more than we do. This is called Down syndrome, and it makes her learn things more slowly than you do. As they get older, we can get into more depth if we need to.

All right, DS lurkers—you can’t hide anymore, I know you’re out there, because I met you. 🙂 I need you to weigh in. Mine is not the only opinion in town. What would you say to all the readers whose lives don’t revolve around DS? How would you advise people to handle the passage of this knowledge?