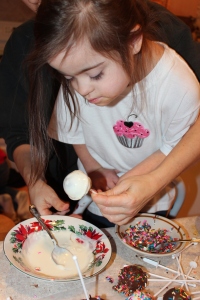 I haven’t written about Julianna’s speech and cognitive development in a while. You’re ready for a post on that, right?

Last Friday morning, hours before the second day of school post-Christmas, Julianna woke up at 4:30 a.m. with terrible respiratory distress and a moderately high fever. By 7:30 a.m. I was sending emails and calling off the bus. Along with the email to her teacher, I crowed about Julianna knowing how to spell all of the “no excuse” words they’d given her. Pretty quickly I got a note back, saying basically: Yup, we know she can spell. She’s great at memorization. Not so great at concepts like “how many syllables?” and rhyming.

Rhyming! Rats. I’d forgotten that one. They told me at her parent-teacher conference last fall that we needed to work on that. So Friday morning I sacrificed my writing time to bring Julianna over to the computer and find some rhyming games.

I started having her try to say the words, and that’s when it smacked me upside the head: she can’t identify rhymes because she can’t say them. She can hear and distinguish words, yes, but her pronunciations are so far off on so many words, and it’s in the sound production that you really begin to make those kinds of connections.

In fact, her speech is actually worse lately (at least in terms of us comprehending it!), because 1) she’s trying to say so much more, to communicate so much of what’s in her head, and her poor muscles just won’t cooperate, and 2) they’ve been working with her on ending consonants, which has for some reason caused her to warp all her middle vowels. Hence, “milk” becomes “mocha” and “drink” we’ve only re-identified in the last two days as “doh-koh.” (Which is better: “deee” or “doh-koh”? Agh!) It’ll all come together eventually, but it was quite the light bulb moment, realizing that what appears to be a cognitive deficiency is actually–still–the fault of low muscle tone.

Every problem this girl has is low muscle tone related: her health problems, her speech problems…

Well, I guess the attitude can’t be blamed on that, right? 🙂

9 thoughts on “Rhyme And Reason (or: the Reason she can’t Rhyme)”