Birthdays in our house seem to be lasting a week this year. (Or two months, if you follow Julianna’s sublime refusal to acknowledge the passage of time.) For the past week Nicholas has been in Heaven. But a weeklong birthday that always falls during Lent causes its own brand of difficulty for a family that gives up sweets. The birthday gets an exception to the rule, but the making of the cake does not. And this year was Nicholas’ first year to take treats to school. And the family was getting together on Palm Sunday weekend for Easter. And a four-year-old has to have a special birthday dinner, and you can’t do that without a birthday treat either, right?

Thus it came to pass that we had to have three separate birthday treats. Show of hands: how many people “snitch” tastes of the batter when they’re making cakes and cookies?

Yeah, me too. Making desserts during Lent requires an extreme act of self-will. Fortunately my mother made the cupcakes for his school. 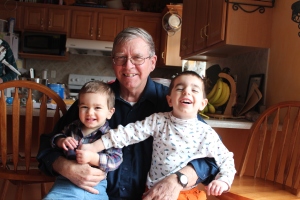 Anyone who’s been reading for any length of time knows that my relationship with my third child is at times combative. As he grows, it’s becoming clear that he’s not simply following the same stages as his older brother, to land in more or less the same emotional place. He’s his own person: a boy’s boy who refuses to understand why I will not let him “kill” people or tell his sister “You’re dead.” He’s been asking for months already when he gets to start baseball. (Not a word about the piano, mind you. Just the sport.) Where Alex, at just-shy-of-eight, still calls us Mommy and Daddy despite knowing he’s old enough to drop the “y,” Nicholas at four is consciously and deliberately transitioning to “Mom” and “Dad.”

In recent weeks the children have begun the yes-no battles. You know, someone bosses someone else, who says “no,” and the aggressor says “yes,” and the other “no,” and it’s a test of manhood to be the last one standing. Mommy is Not.Fond of this stage.

Nicholas also has a finely-tuned sense of injustice. Not necessarily correctly tuned, but definitely finely tuned. He routinely pushes us all the way to outright punishment before, yanno, following a simple direction like “go use the bathroom,” and then wails and screams as if we’re the ones being unreasonable. He can stretch a two-minute task into a ten-minute battle, and doesn’t seem to get that if he’d just done it in the first place, he’d be on to something more fun already.

Part of this sense of injustice is the fact that Julianna still gets lots of help getting dressed. He doesn’t think it’s fair that his older sister gets help and he’s expected to do it by himself. So when I was brainstorming things I could do with or for him on his birthday, that was the first thing that came to mind. I went and woke him up with kisses and a soft singing of “Happy birthday,” which brought a smile. “Nicholas,” I said, “go use the toilet and brush your teeth, and then if you want you can bring me your clothes and I’ll help you get dressed this morning, since it’s your birthday. How does that sound?”

He can be so darned sweet when he wants to be. So very helpful, eager to be sent on errands or given little jobs. You just never know. I wonder sometimes if it’s in the tone of voice of asking, but I’m not sure that’s the whole answer.

What Nicholas doesn’t have is a strong vision of his preferences. Alex was well into the superhero stage by the time he was four–for three years he wore the same Superman shirt every day unless specifically ordered into another one, or unless it was in the laundry. Nicholas isn’t like that. He picks his cake decor from the scrapbook gallery of previous cakes, and this year he at last settled on a castle. And since this post has gone really long, I’ll just stop there and show off Nicholas’ second “castle cake,” which was a collaborative effort of Mommy’s assembly and Daddy’s decorating skills.

5 replies to Of Nicholas, At Age Four