Almost every day, Julianna’s bus driver has a story to share about my daughter when I come to get her off the bus. Wednesday of this week, on the heels of Julianna’s first horseback riding lesson of the year, the story was this: “Julianna told us that she rode a purple unicorn. We couldn’t understand his name, though. We think ‘interval’?”

(For the record, the horse is a bay, and his name is Richard.)

2: How To Motivate A Slow Child

Every day, getting Julianna off the bus requires that I, her driver, the other kids, and whatever poor schmuck is stuck behind the stop sign wait while she stretches luxuriously, hugs every child on the bus, admires her reflection in the rearview mirror, and stumbles through some deeply exciting story that neither I nor anyone else can entirely decipher through her enthusiasm. Wednesday, though, my cousin and her family were waiting in the house, and I knew just how to get her moving. “Julianna, guess what? There’s a BABY in the house!”

Julianna was off the bus in ten seconds flat. 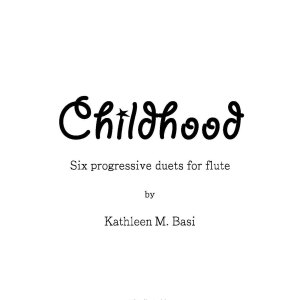 It’s been another crazy week, as all of them are during Little League season. About the only claim to productivity I can make this week is that I self-published a set of flute duets for upper-middle-school and high school players, called “Childhood: Six Progressive Duets for Flute.” The great thing about duets is that students can learn them in full, including ensemble, with their teachers. I always hated playing duets where one person got the fun stuff and the other person was stuck with low notes and boring stuff, so I wrote these so the parts would trade back and forth. The titles give you an idea of the style: Night Lights, Swing Sets, Bike Riding, Afternoon Tea, Superheroes, and Roller Coasters. Know any flute players or music teachers who could use such a thing? 😉

I rehearsed them yesterday with my undergrad flute teacher. He has always been a very supportive human being, but one can’t help but blossom when someone who’s had that kind of influence on you uses words like “delightful!” to describe your music.

Alex has been growing as a baseball player this year, which is beautiful to see. He’s been catching quite a bit and pitching a little. However, my favorite Alex share-able right now is this, which tells so much about him: 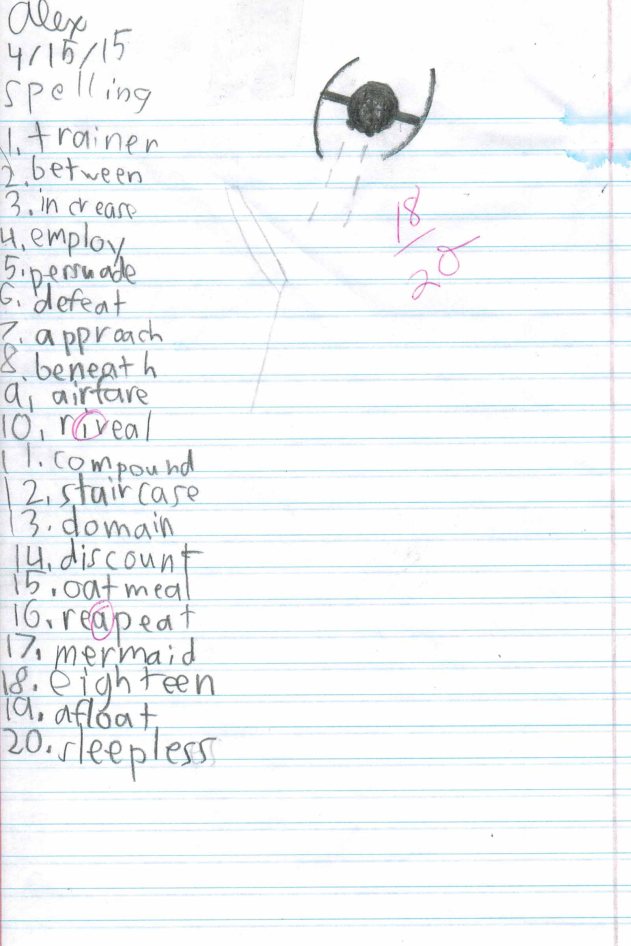 (We told him he needed to stop drawing TIE fighters on his spelling tests until they start coming back perfect scores. But we hung the paper on the display wall, too!) 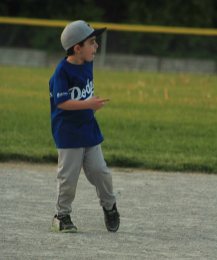 Nicholas gets a shout-out today for being an incredibly good sport. He’s glorying in being in baseball, and he has a maddening self-confidence in his own ability, especially given that he’s, yanno, in kindergarten. But he gets full marks and then some for spirit, not only at his games but his brother’s: he’s the loudest cheering section at Alex’s games by far. He does “Let’s go Pirates!” cheers and yells “Good job!” with a complete lack of self-consciousness that shows how big a heart he really has.

Michael? Michael is on summer break already. His preschool did a “circus” last week in which the kids introduced themselves before doing a trick. Michael’s trick was a balancing thing I can’t even describe, but the introduction was very revealing. He’s spent the second half of this school year in a speech-language classroom with other kids who have apraxia, but he progressed so quickly that his teachers finally began questioning whether he really does have apraxia. Michael’s introduction, that night, was way more clear and comprehensible than any other child, including the “peer models” who are there to model typically-developing skills to their classmates. Next year he will be in preschool as a peer model himself, but in a classroom right here in our neighborhood, which means we can ride bikes up there when the weather is decent.

But I digress. The story I really wanted to tell about Michael is this:

Last week, we were walking back and forth across the street at the Little League complex, dropping Alex off, dropping Nicholas off, coming back to watch Alex catch, then going to watch the end of Nicholas’ game, and all coming back to finish the night back at Alex’s. As the last inning of Alex’s game was finally wrapping up, I started collecting the spread-out remains of dinner and entertainment in preparation for going home, and I felt in my pocket for my keys….and they weren’t there.

Including the key to the van, the only vehicle big enough to get the whole family home.

The friend I was sitting beside offered to keep an eye on the kids while I retraced my steps back and forth to find them. But just as I got off the bleachers I had this Holy Spirit moment that told me, “Check Michael’s coat.” That’s the only explanation I can give, because the impulse was so irrational and so strong. I mean, his coat pockets aren’t big enough to hold that rack of keys….

And yet there they were. Michael picked my pocket while I was watching the game.

7QT posts always get so wordy! But I hope I at least entertained you. Have a great long weekend, and head over to This Ain’t The Lyceum for more.