In grade school, I had a principal who had once been a sister—at least, so I was told. The main thing I remember about her is how particular she
was about how we recited prayers as a school. I remember one day we all sat down in the church, and the teachers handed out cards in which the spaces between the phrases had been replaced by slashes and double slashes. She made us practice choral speaking until we all said them in unison. 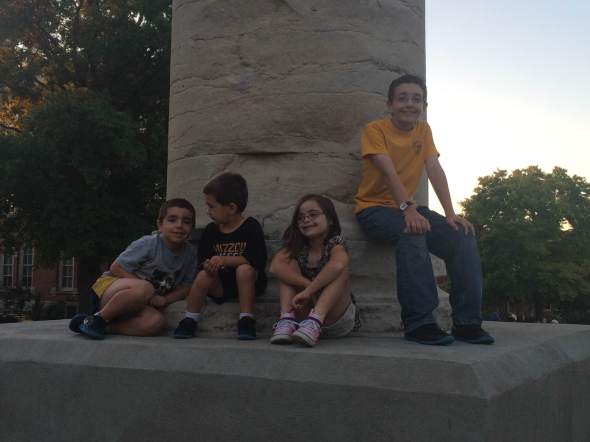 I think about this many nights now at bedtime, when my brood is sprawled out in various positions around whichever room we’ve occupied.

There’s Alex: “Our Father, who art in Heaven, hallowed be thy name…”

And Michael, his hands folded, looking cherubic until the middle of the prayer, when one of his parents realizes he’s not speaking at all and scolds: “Michael!” At which point he picks up slowly and deliberately: “Die kinndom come, die wih-ohh be done…” And then, to wrap it up, he says, “In duh name of faddah and-a-son, and-a hoh-wy speet. Amen. What are we pwaying foh?” After which everyone fidgets and fights. (”I already prayed for that!” “I can pray for Father Brooke, too!” “No, you can’t!”)

I must admit: frequently, prayer time does not feel terribly prayerful in my house.

On the other hand, it’s very real.

For a long time, I felt guilty because we don’t do the whole on-our-knees-around-the-bed thing. That’s how I grew up. Christian rolled his eyes, because he grew up with bedtime prayers in bed. To me, it was one of those “the posture influences the attitude” things. To him, it just feels legalistic. But he’s learned to tell everyone to “find a quiet spot.” That way all the fighting for who gets to sit on Mom’s lap/with Mom’s arm around them (and elbowing Mom’s most sensitive body parts) is done before we start.

Truthfully, my mind wanders every bit as much when I’m on my knees as it does in any other position: prone, supine, criss-cross applesauce on the edge of a bluff…for me, prayer has by default become more catch-as-can than I would like. There’s a fine line to walk between accepting the season of life for what it is and settling for mediocrity.

So lately, when things get just a little too beat-em-up, big brother (”hallowed be thy—STOP KICKING ME! MOOOOOOMMMMMMMMMM, HE KICKED ME!”) or a little too distracted (like the one who likes to sit on top of the rocking horse and gallop his way through the prayer), I’ve been yelling, “STOP IT! WAIT A MINUTE!” And when dead silence falls in the room, I say, “We’re going to start over, and we’re going to say this like a prayer.”

It’s a place to start, anyway.

2 replies to Extreme Prayer With the Basi Brood