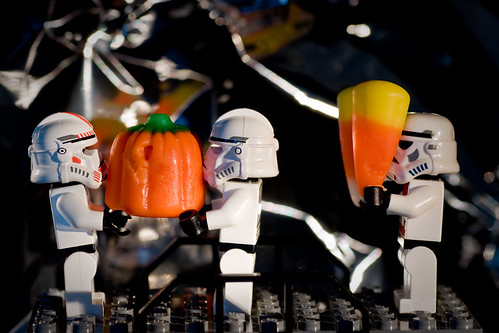 That’s my candy pumpkin! No, I had it first! You’ve had three already! MOOOOOOOMMMMMMMM!!!!! (The LEGO storm troopers never disappoint. Image by DuckBrown, via Flickr)

A lot of days, I feel like I live in a war zone. And a lot of days, I just want to throw in the towel. Like yesterday, for instance. We let the kids sleep in, let them wake up slowly, gave them no responsibility whatsoever. Just a nice, relaxing morning, in advance of a once-a-year treat: a baseball game.

By nine-thirty a.m., there had been three major fights, at least one of them taking place outside for the edification of the entire world.

Every so often I ask adults how they got along with their siblings when they were kids, and how they get along now. Christian likes to say that his brothers beat each other up, but then it was done—and nobody, but nobody, outside the family had better mess with them. And now, generally, they get along great.

A lot of other people tell me, “Sure, we fought some, but mostly we were really close. We were best friends.”

When I hear things like that, I can’t help feeling like a complete failure as a parent. Because surely it’s our fault—and really, mine, because I’m the primary caregiver—that my kids haven’t learned how to deal with each other with some slight measure of tolerance. That they get in each other’s business to the point where the fighting sometimes seems nonstop. I get so tired of being asked to arbitrate “he hit/kicked/pinched me” or “he won’t give me the fill-in-the-blank.” Because a hit was almost always provoked by the victim at the end of a long escalation, and you can never tell who actually fired the first shot. And there’s virtually no way to get a straight answer about which kid actually had dibs on the toy (or book, or article of clothing) in question. Sometimes I just take it away from them both, because it’s easier.

Not that long ago, I told them I refused to arbitrate, because they were asking me to play favorites, and that wasn’t fair to me.

We try to teach conflict resolution in love. We require apologies—often from both parties, because so few conflicts are one-sided—and we require the words “I forgive you” (NOT “It’s okay,” because that’s flatly untrue; it’s NOT okay; if it was, there wouldn’t be a need for an apology in the first place) and a hug. Which is the hardest part, by the way. Words are easy. Actions make it real. We talk about Jesus, we talk about love and kindness and the importance of family–that someday, when we’re gone, all they’ll have is each other.

I don’t use the word “mercy” with the kids, because it’s taking me so long to wrap my head and heart around it. But mercy is what I’m trying to teach. They’re very aware when I’m having to take deep breaths and self-regulate my own reactions. I don’t try to hide it. And I’m pretty open about apologizing when I don’t succeed.

Some days I think this is all part and parcel of the learning process. I can take it philosophically.

Other days, I just feel frustrated.

(Can you guess which is true today?)

Recently I wrote an essay for Columbia Magazine called “Mercy Begins in the Home.”. My kids opened my eyes to that reality, but there’s a vast chasm between recognizing something to be true and teaching them to choose mercy themselves.

Of course, choosing mercy is a tall order for children at ages almost-5, 7, 9, and 11. But if we don’t expect it now, how can we expect it from them ever?

Empathy and “here’s what works for us” would be welcome.

4 thoughts on “Notes from The War Zone”