I learned something about myself in traveling these past two weeks. When I’m in charge of travel, I’m susceptible to some pretty strong anxiety.

I like traveling. I like experiencing the world, seeing new places. I like it a lot, in fact. But until last weekend, I didn’t realize how stressful I would find it to be The Responsible Party for a major trip—you know, airport security, anxious child, rental car, driving in a remote mountain area. Until last weekend, I hadn’t really sympathized with the stress Christian feels when we travel as a family. You know how it is—in a marriage, one person takes lead in certain areas (mine are kid logistics, meals, and family scheduling) and the other takes the lead in another. One of Christian’s areas has always been travel arrangements; I’ve always been the support personnel.

Last weekend it was just me and Nicholas. It was supposed to be a 3-hour road trip from the airport to our destination, but it ended up taking nearly five. Services signage on the Pennsylvania Turnpike is basically nonexistent. We had to just pick an exit and hope there would be food and gas there, and we ended up in a traffic snarl. Then there was the chocolate factory stop—we saw it on the Philadelphia map and since one of my goals for Nicholas on this trip was teaching him to navigate by a real map (gasp!), I had him give me directions. I was smart enough to study in advance and get a general idea of where I was going, but the map was not exactly…complete.

We found our way, but we asked a local for directions on the way out.

And lest anyone be thinking, “If you’d just follow Google”…. We had a classic Google Maps fail, too. The kind where the directions said, “Continue straight onto No-Name Road,” which didn’t exist, though there was some other road there. One-lane. Like a private drive. Turning to gravel. And then dirt. With road construction vehicles, and forest pressing in on both sides. We had to backtrack 8 miles of 25 mph mountain roads to find another route.

And of course, I don’t have a smart phone, so I couldn’t default to following the GPS. (The resort recommended not relying on GPS anyway, but I am perfectly willing to admit when it’s time for me to bow to reality; I remain a smart phone conscientious objector, but following this trip I am willing to admit that I need a phone that will allow me to buy internet minutes in order to access GPS if I get lost.)

But it’s always the getting there that causes the stress. Actually being there was…wonderful. We could not have enjoyed ourselves more. The pool, the paddleboat, the kayak, the shuffleboard, the Halloween Olympics, the food, the bumper boats…there was nothing not to like about this place. We settled in and didn’t budge all weekend. We even attended Mass virtually so we wouldn’t have to leave the property. 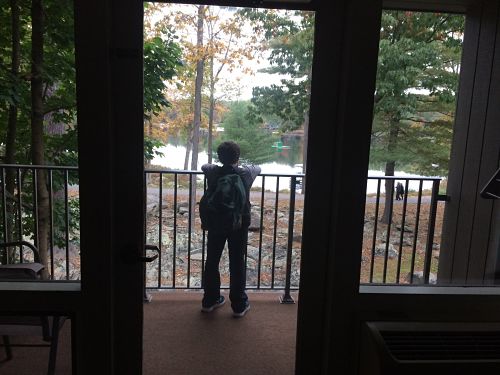 At the end of the weekend, I wanted to spend a couple hours at Valley Forge on the way back to the airport, partly for my own sake, but mostly to add a veneer of education to taking Nicholas out of school. We made it, but we had signage issues on the Turnpike again—another Google maps fail, as they don’t give you exit numbers, only mileage amounts, and so I was looking for I-476, not the Pennsylvania Turnpike, and when the sign said “Penna Turnpike—Scranton-Harrisburg”—and NOT Philadelphia (how can they NOT HAVE PHILADELPHIA ON THAT SIGN????)—well, suffice it to say I missed the exit and blew 15 minutes getting turned around.

Somewhere on that last 30 miles down the Pennsylvania Turnpike, with traffic backing up and stopping and the minutes we had for visiting the national park ticking away, I realized that my blood pressure was sky-high and all my venting was adding considerably to my son’s anxiety levels. After that I toned it down a lot, but it made me realize how much impact my own anxiety has on other members of my family.

It also made me reconsider our approach to family trips in general. Upon coming home and hearing my stories, Christian laughed and said, “I’m kind of glad you had this experience, because now you know how I feel on trips.” We decided it was time to rethink the way we split up the duties on these trips. He has to give up some control and I have to take some responsibility—and we both have to be willing not to get mad at each other when things go wrong, as they inevitably will.

One of the things they say about travel is that it’s educational. I always knew that—I guess I just didn’t realize they meant you’d be learning about yourself.

2 replies to What I Learned About Myself While Traveling