There’s a commercial on TV these days for Kleenex. The woman goes around frantically murmuring, “touch…touch…touch…” Finally she gets to the Kleenex box and all time stops while she has this surreal, spiritual moment labeled “feel.”

This ad has always bugged me because it shoves human touch into the category irritant, while holding up an inanimate object as something beautiful, elevated, apart. (And because Puffs are a lot softer anyway!)

Moms often talk about feeling “touched out.” I understand this concept, but it doesn’t happen to me very often, because in the languages of love, I’m a “touch” person. I used to bicker with Christian because I craved that sense of touch, and I didn’t want to have to be the instigator. In the last three to four years, that has gone away, because I have young children. I get touched a lot. If I plop down with the telephone, it’s a signal for all three of them to crawl on me and fight for a piece of my body. 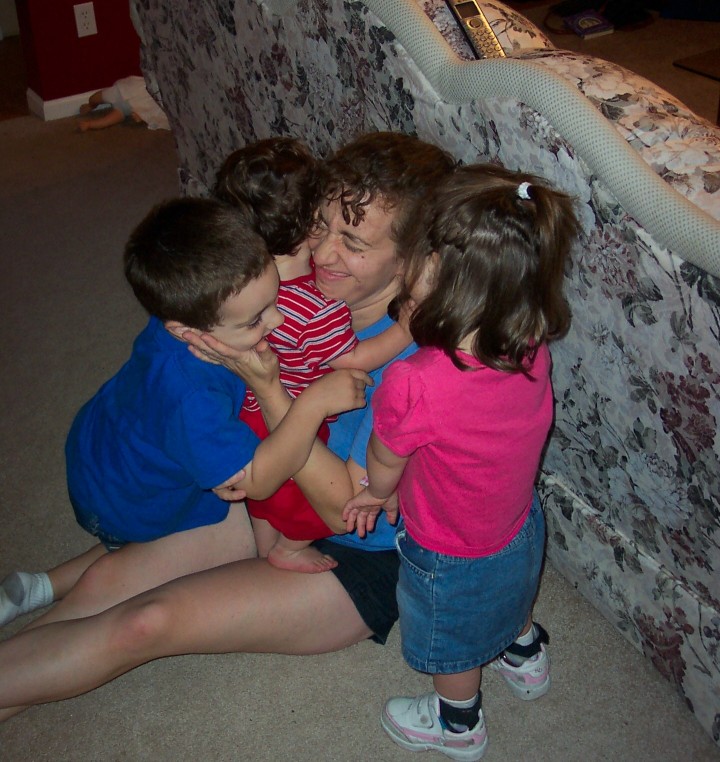 Generally, I glory in this. I chew on my babies, I tickle, I hug—as far as I’m concerned, the best thing about having young children is the constant tactile connection.

For Christian, whose language is “acts of service,” this is all good news. He tires of physical contact very quickly. He likes his personal space. But I’ve warned him that when the kids get older, he’d better watch out!

But there’s more to this than just what I need. It’s also about what my family needs. In my ongoing struggles to find balance, I constantly wrestle with this idea: that I should be keeping the house better as an act of service to my husband. And in the last week, I’ve realized that Alex is old enough to have a primary love language, too. His is gifts. He has spent the entire last week making art projects as gifts for me and for Christian. Then he made drawings to hang over every bed in the house, specific to each person.

Aside from being impossibly sweet, this illuminated another tendency of Alex’s: the constant desire for more and new stuff. He wants a physical memento of every experience—something as simple as a rock picked up from the gravel driveway at Grandma and Grandpa’s farm will do. He’s only 5, and already we have no idea what to do with all the junk on his dresser. We come down hard on him for always demanding new toys every time we go to an air show, a carnival, Bonkers, Target… All this time, I’ve fretted about greed and flightiness. But maybe it’s just that gifts are the way in which he most clearly feels our love for him.

And this presents me with a quandary: How do I reconcile the need to honor and affirm his primary love language with my own aversion to consumerism and clutter and useless Stuff? With the real belief that kids have too much—far more than they need—and that giving them Stuff leads to a sense of entitlement and dissatisfaction, to them feeling that nothing is ever good enough?

So, my dear readers, I need your help. I know there must be a way to “gift” my son without capitulating to the consumeristic culture. But I’m at a loss. What am I missing?