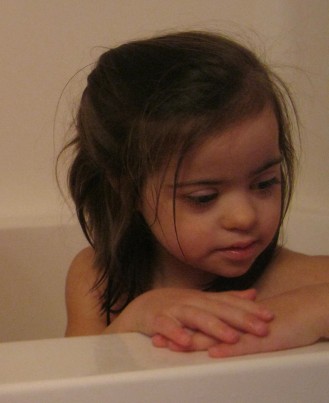 Last Friday was Julianna’s kindergarten IEP meeting. The wisdom of my fellow parents-of-kids-with-special-needs told me I needed backup for it. Several people offered to accompany me. If I’d remembered before the meeting, I probably would have availed myself of the offer, but as I said earlier this week, my life is crazy, and I only remember the essentials…you know, diaper changes, feedings…because the need makes itself obvious. 😉

However, I have a good relationship with all the people who work with Julianna in preschool, soI wasn’t worried. it was generally a positive experience. It takes an hour or so to go through current skills strengths, weaknesses and goal-setting, and then we got to the part where we say “how many minutes in the regular classroom, and how many minutes of special instruction?” At that point, I sensed everyone in the room taking a deep breath, and I thought, Uh-oh.

The problem, her classroom teacher pointed out, is that the people at the new school don’t really know Julianna, don’t really know what she’s capable of. So while we, and specifically she (the teacher), know her to be more than capable of a high level of inclusion, the new team wants to play it cautious. After all, we’d rather over-support her and withdraw it quickly than under-support her and have her begin kindergarten with frustration or failure.

It makes perfect sense, and for that reason I took a deep breath and signed off on something utterly contrary to everything I want for my daughter: namely, putting her in a self-contained classroom for all regular instruction, with only her “specials” happening with her typically-developing peers. I did so with a very clear instruction that I wanted it in the plan that re-evaluation would begin immediately, and not late in October or November. And only after taking down three different names for people within the new school whose phone lines I can burn down to make sure it doesn’t get set aside.

I signed, but I have tears in my eyes thinking about it, and a vague sense of nausea. Because I know how hard it is to move a bureaucracy unless you have an advocate within…and my whole support system is at the early childhood center, not at the elementary school. And our goal for the kindergarten year is to see if Julianna can function in the classroom without that support, because only then can we explore the possibility of sending her to Catholic school with her brothers. 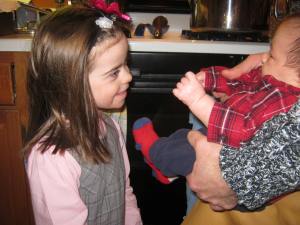 I spent all week watching her outdo the expectations for a child with Down’s. They think she needs special P.E. because she’ll need help with stamina navigating a school so big. Knowing my child, I shook my head and smiled. I smiled bigger three days later when she pushed a stroller containing a child almost as big as she is up a huge hill, down the hill, around the corner, 2/3 of a mile from the fire station to our house. Stamina: check.

I watched her name colors and identify letters, and shook my head at 65% special instruction, because she really isn’t much behind other almost-5-year-olds in terms of her knowledge…only in speech.

And then, as I worked on a music list before choir practice yesterday afternoon, she settled at my feet with the cards from the “Your Baby Can Read” box. I’ve ceased to wonder why she’s interested in a bunch of cards with no pictures, only words; she just likes shuffling through them. In the middle of scribbling notes to myself, Julianna uttered her usual “pay attention to me” grunt. I turned around to see her making a sign I didn’t recognize: her hands crossing in front of each other repeatedly, as if drawing attention to her ribs. “I don’t know that sign,” I said, but she kept signing insistently. I glanced at the card on her lap. It said “zebra.” “Zebra?” I said halfheartedly.

“Euh!” she said happily, and signed all the more furiously.

I frowned, trying hard to squelch the leap in my chest, and turned to the computer. And I found this link. And my breath caught.

My girl can’t talk, but she can read…at least a little.

My breath caught, because now I know I have reason to fight for what I always said I wanted for her.